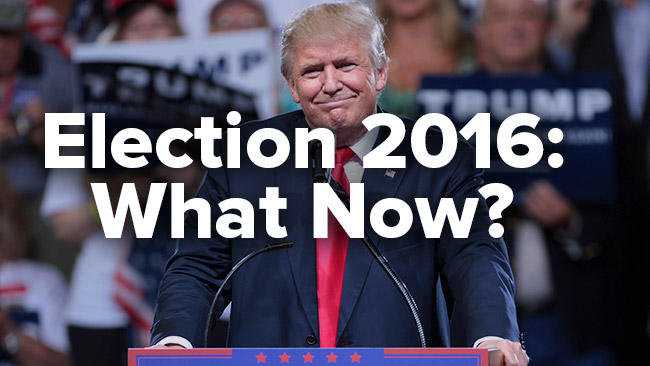 For the past several months, we have known that on November 9th we would have a new President Elect. Many of us watched Tuesday night as election results came in. We all knew going into this election that our nation would be divided over the results, and this is exactly what has unfolded. Many were delighted, and many were grieved.

Much focus has been given in the past months as to how Christians should conduct themselves in the political process. Many—including me—have weighed in on how Christians should think, and vote, in light of Scriptural guidance. Now that the votes have been counted, we will do well to consider our calling in response to the results.

In other words, what now?

First and foremost, we are all called to hope in God, remembering that our ultimate citizenship is in heaven. If you are troubled by the election of Donald Trump, you can find comfort in knowing that no president or government is able to thwart God’s good plan. If you are excited about the election of Donald Trump, take care to remember that nations and rulers are a drop in the bucket to God. Our hope is in God, and a presidential election should not lead us into despair or into euphoria. A presidential election changes nothing about God’s sovereignty, His goodness, or His calling for His people.

Secondly, we are called to pray. First Timothy 2:1-4 says,

“I urge, then, first of all, that petitions, prayers, intercession and thanksgiving be made for all people—for kings and all those in authority, that we may live peaceful and quiet lives in all godliness and holiness. This is good, and pleases God our Savior, who wants all people to be saved and to come to a knowledge of the truth.”

Part of our calling is to pray for President Elect Trump, as well as our other governmental leaders.

Pray for divine guidance, for wisdom, and for a unique work of God’s Spirit in their lives.

Thirdly, we can move forward by remembering that God has used all kinds of flawed people and accomplished His purposes through them. Before the results, I was critical of those who compared Donald Trump to biblical figures like King David, Samson, and Cyrus. I believed—and still believe—that those were weak parallels because the Israelites never had a hand in electing those leaders. To say that God would work through a flawed man like Donald Trump is not different than saying that God can work through a flawed woman like Hillary Clinton. God can do both.

However, now that we have the results, I believe that the parallels have greater credence. No Israelite voted for the Persian king named Cyrus. However, God still used this foreign king to initiate and finance the rebuilding of Jerusalem after the Israelites had been in exile. No Israelite voted for Samson to be their deliverer. However, God mightily used this erratic womanizer to deliver the nation from the Philistines. God is in no way limited by human weakness and sinfulness.

I have had grave concerns about the character of Donald Trump.

I still have all of these concerns. I believe that he is a godless, crass, greedy, narcissist. (To be fair, I think Hillary Clinton is an entitled, corrupt, power-hungry liar; I believe we had historically poor candidates this year.) That said, he will be our next president. None of those flaws or sins can keep God from accomplishing His will through—or despite—him. We are called to pray to this end.

Fourthly, and finally, we are called to speak prophetic truth to our culture and our leaders. I am struck that some people compared Donald Trump, with all his weaknesses, to King David, who committed adultery and murder. It is worth noting that the prophet Nathan spoke bold truth to David after these sins. The prophet told David the truth about what God had to say about his actions. The church of Jesus Christ has the calling to speak God’s truth to the culture regardless of who is in power. We must not be selective. We must identify good and evil and call them what they are. This will always be the role of the church in the culture. Collectively, we are the prophetic voice of God. Be bold and tell the truth.

If you are excited about the results of this election, give thanks to God and then remember that no human leader can bring us the deliverance for which we long. If you are discouraged by the election results, cast your cares upon God and find your hope and comfort in Him, remembering that God is neither surprised nor overwhelmed by what happened on Tuesday night. Hope. Pray. Remember. Speak.

Page load link
Heads Up! We're about to change our service times. Beginning August 14, join us Sundays at 9 or 10:45 a.m.