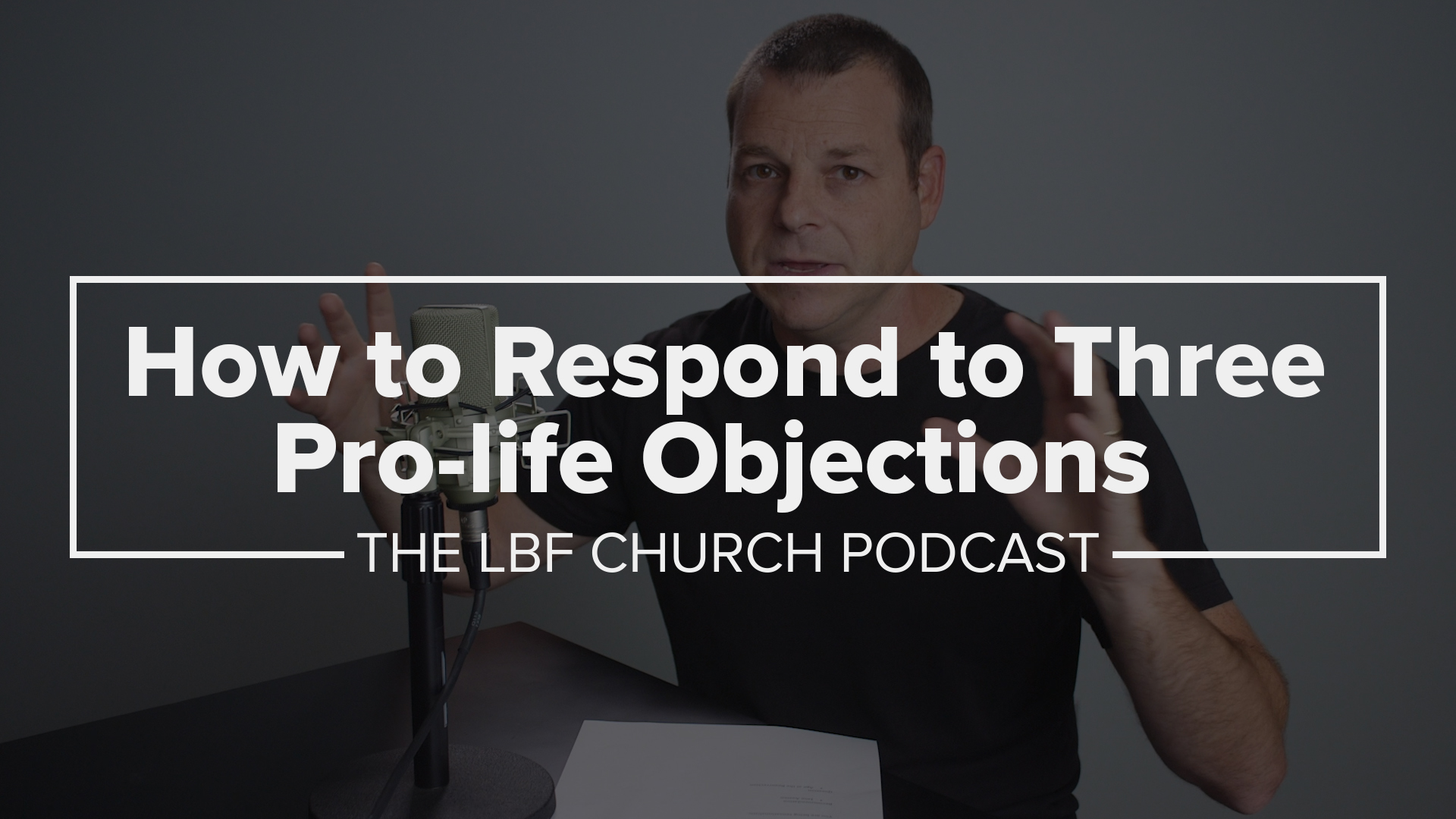 How to Respond to Three Pro-life Objections

At LBF Church we are pro-life. This is not because we align ourselves with a specific political party, but because we believe that God is the author of life and that God calls His people to care for the most vulnerable and to

“Speak up for those who cannot speak for themselves, for the rights of all who are destitute” Proverbs 31:8

With this in mind, I would like to address three common objections to the pro-life position. These objections are important because they are, most of the time, honest objections that pro-life people should take seriously and be able to answer with compassion and thoughtfulness.

Every year when we hold our Sanctity of Life service, I know that there will be women (and men) who feel deeply uncomfortable because they have participated in an abortion in their past. There are some who argue that it is cruel to talk about abortion as evil because it heaps guilt on people who have had an abortion.

On the one hand, this is undoubtedly true. Talking about the evil of abortion will make many people who have had abortions feel guilt or shame. On the other hand, we have to ask if this automatically means that we shouldn’t talk about it.

Adultery is something that is clearly an evil action according to Scripture. That said, there are undoubtedly a number of regular church attendees who have committed adultery in their past. Few of us, however, would say that there should be no mention of the evil of adultery simply because it would bring up guilt for some.The purpose of bringing it up is not to heap guilt on people who have fallen short but to warn others so that they don’t participate in this evil. The same is true of abortion.While it is unfortunate that it results in some people feeling guilt and shame, it would also be unfortunate for others to end up making bad decisions because we refused to talk about something that made some people uncomfortable.

The purpose of bringing it up is not to heap guilt on people who have fallen short but to warn others so that they don’t participate in this evil. The same is true of abortion.While it is unfortunate that it results in some people feeling guilt and shame, it would also be unfortunate for others to end up making bad decisions because we refused to talk about something that made some people uncomfortable.

While it is unfortunate that it results in some people feeling guilt and shame, it would also be unfortunate for others to end up making bad decisions because we refused to talk about something that made some people uncomfortable.

On top of this, the Christian solution to guilt is not avoidance. We don’t simply pretend that we have no sin. We experience freedom from guilt and shame because of Jesus’ sacrificial death and resurrection. We need not shy away from talking about adultery, and violence, and deception, and abortion simply because people have failed in these areas. As Christians, we have the true solution to guilt.

You are being uncompassionate toward the mother.

Some people will reason that the pro-choice position is the compassionate position because it takes into account the fact that women who choose to have abortions, for the most part, do it because they are overwhelmed and afraid. They choose abortion not out of hard-heartedness, but out of desperation. Pro-life people, the argument goes, are denying relief to women in desperate situations.

My experience in working alongside Assure Pregnancy Clinic tells me that it is true that most women do not choose abortion casually. Most agonize over it. Many who choose it, believe that they are doing something wrong, but that their desperate situation leaves them with no choice.

Compassion for mothers in these situations is vital. This is one of the reasons why I admire ministries life Assure, where they provide counseling, medical assistance, parenting classes, and baby clothes for expectant (and new) mothers. Pro-life people are carrying for those unborn children by caring for the mothers.

This said, it is tragic to me that pro-choice people, in their claims to be compassionate, seem to ignore the vulnerable baby who cannot speak for herself. If a mother had seven children and was utterly overwhelmed and in financial distress, we would certainly not think that this would justify her killing one of her children in order to ease her burden.

Instead, we would protect the life of that child, while offering financial, emotional, and practical assistance of any kind. The desperation of our situation does not justify the killing of an innocent and vulnerable person.

You are being sensationalistic.

Some people will criticize pro-life people who speak about abortion by calling us sensationalistic. There is no doubt that this critique is sometimes true. Sometimes pro-life speakers use language, pictures and, analogies that are purposefully provocative. While, in general, I think the sensationalizing subjects is not helpful, I do think there are times when strong, shocking statements need to be made.

If pro-life people simply talk about “terminating a fetus,” I believe this accepts the faulty premise that we are not talking about the loss of a life. On the other hand, I think it is rarely helpful to use terms like holocaust when it comes to abortion—not because it is untrue—but because it often creates an us-and-them divide that is very hard to cross.

If you have the calling to speak about abortions in public setting and debates, I believe that there may be times when it is helpful to use provocative language, to use pictures of aborted babies, or to use descriptions of what comes from abortion.

The shock can be useful. I believe, however, that most people’s minds are changed not through public speeches, but through personal conversations. If your neighbor is considering an abortion, I don’t think it will be helpful to tell her that she is participating in a holocaust.

It would be much better to help her to look toward her future instead of being blinded and overwhelmed by what is right in front of her. Show compassion, offer any help that you can personally give, and to encourage her that her situation is not as dire as she thinks.

If you have a personal connection to someone considering abortion, you have more influence than the politicians, the lawmakers, and the people making public speeches. Use that influence with compassion and boldness.

Abortion is an important and emotional topic. Don’t let this keep you from speaking up for those who cannot speak for themselves, and never believe the lie that you have to choose between compassion for the mother and compassion for the child.

By upholding the sanctity of life, you are encouraging people to make choices that may result in difficulty in the short-term, but will result of greater hope and less regret in the long-term.

Page load link
Heads Up! We're about to change our service times. Beginning August 14, join us Sundays at 9 or 10:45 a.m.