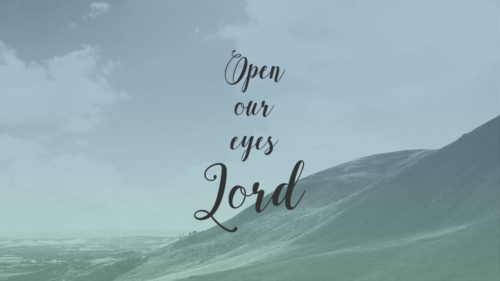 Throughout our series The Church and the World, which walks through the book of 1 Corinthians, we will be confronted with the fact that the way God sees reality is different from the way that our world sees reality. We will consistently be challenged to embrace the counter-cultural message of Jesus, as He instructs us about wisdom, about sin, about decision-making, about hope, and about power. Living in light of God’s wisdom is impossible without faith. We must believe in what we cannot see.

In 2 Kings 6, Elisha the prophet ended up in a frightening situation. The king of Aram has ordered his men to find him and capture him while he was living in a city called Dothan. After they found where Elisha was staying, verse 14 says that the king “sent horses and chariots and a strong force there. They went by night and surrounded the city.” This was not a friendly visit. This was a group of hostiles, ready to capture, torment, and eventually murder Elisha. Things were looking grim for the prophet.

For most of us, we would assume that this event would mark the final line of our obituary. This is certainly the reaction of Elisha’s servant when he sees the surrounding army. In verse 15 he says, “Oh no, my lord! What shall we do?” The servant’s heart is filled with fear and despair. Enemies surround them and there seems to be nothing but pain and death in the future. But in verse 16 Elisha simply says, “Don’t be afraid. Those who are with us are more than those who are with them.”

At this point, Elisha’s servant could have begun to contradict this strange claim by his master. After all, the servant had just looked outside with his own eyes. He saw the Aramean army. He saw the frightening enemies that surrounded them. It was absolutely natural for him to believe that he understood what was going on. But Elisha seemed to believe that his servant wasn’t seeing the whole story. He believed that there was more to reality than what was visible on the surface.

Verse 17 says, “And Elisha prayed, ‘Open his eyes, LORD, so that he may see.’ Then the LORD opened the servant’s eyes, and he looked and saw the hills full of horses and chariots of fire all around Elisha.” And in a moment of powerful clarity, the servant saw reality from God’s point of view. What once appeared to be a desperate and terrifying situation suddenly became an occasion for hope. The servant realized that the reality that seemed most obvious was not the true reality.

With God, there is always more going on behind the scenes.

The good news is that what we see is not all that there is to see. The God who sent His one and only Son to die for us has promised that He is working all things for our good. In other words, the one who is with us is stronger than the ones who are against us.

We will be empowered to live the counter-cultural life that Jesus calls us to live when we learn to expect the good God to do good things for His people.