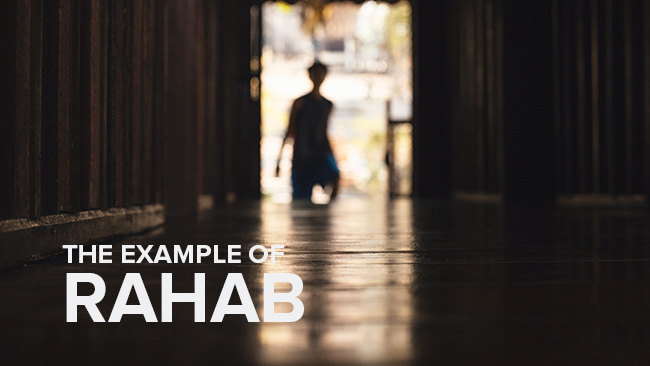 The Example of Rahab

I have always found the story of Rahab in Joshua 2 to be one of the most fascinating stories in all of Scripture, but perhaps not for the normal reasons why people find it interesting.

Some find this story interesting because Rahab is a prostitute, and yet somehow ends up being a hero in the story. In fact, she ends up in the genealogy of Jesus. This is a great example of God redeeming people and putting them in places of prominence. While this is great, it is not what captures my attention.

Others find this story interesting because Rahab lies in order to hide Jewish spies from the authorities in Jericho. The story raises questions about when it is permissible to lie. I confess that I find this discussion fascinating. Yet this is not why this story sticks with me.

When Rahab takes the Jewish spies into her home, she is faced with a choice. She could hand them over to the authorities in Jericho, thereby currying their favor. She might even become a local hero for helping protect the security of Jericho from this invading nation. Or Rahab could hide the spies and throw in her lot with them. She could tell them that she believes they will be successful against the mighty city of Jericho and that she wants to be counted as one of them. This would be a risky endeavor, putting herself in great danger from her community.

If you know the story, you know that Rahab risks it all to side with the Israelites. After lying to the men of Jericho and sending them away, she tells the Jewish spies that she believes that they will be victorious over Jericho. She asks them to show her kindness and to spare her and her family when they attack the city. The spies quickly agree, grateful for her help.

Rahab sided with the Jews despite being able to look around her at the fortified walls of Jericho. Despite Jericho’s strength, she feared and believed in the God who had delivered the Israelites from Egypt and had given them victory over two Amorite cities. Instead of hedging her bets and playing it safe, she risked everything for a future that she believed was coming.

Many of us struggle to live fully for Jesus because it seems to us that we will advance further in life by living according to the normal social norms. Why risk comfort and prosperity and safety? Why sacrifice money and time and social position? It seems easier to go with the flow of what we see than to risk it all for the kingdom that seems hidden from us.

As you wrestle with the challenging and all-encompassing call of Jesus, take time to remember Rahab. Remember the woman who was living a convenient life, yet risked everything for a reality that she had yet to see. And remember that Rahab was vindicated when God gave the Israelites victory over Jericho. Remember that this same God promises vindication for all who live in light of the kingship of Jesus. No risk for Jesus will ever be wasted.