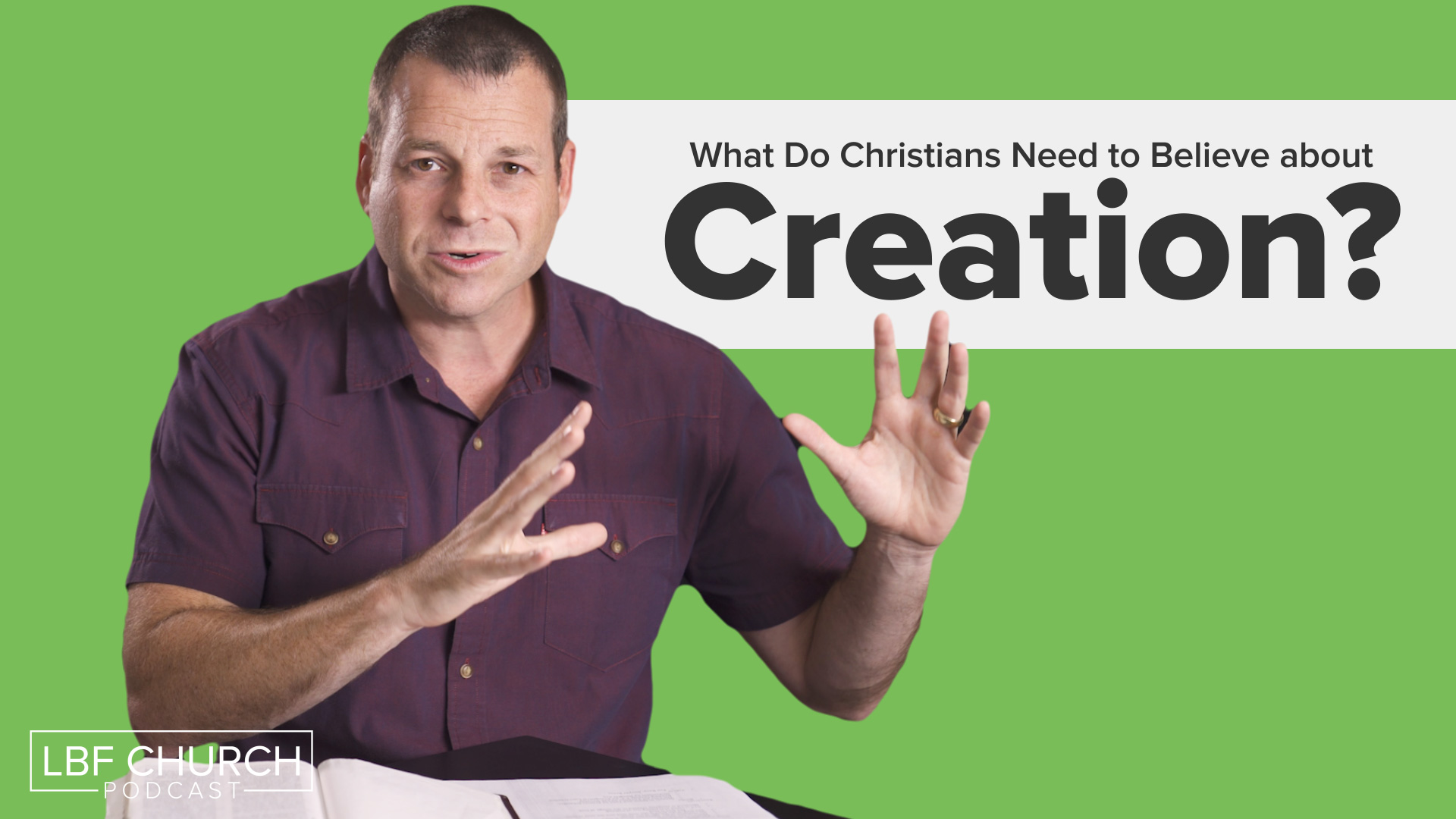 What Do Christians Need to Believe about Creation?

At LBF Church, we have recently begun a series through the book of Genesis. The first chapter of Genesis brings up all kinds of questions about creation when it comes to timelines, order, and interpretation. Are these six 24-hour days? Is Genesis 1 literal at all? What beliefs about creation are within the realm of possibility for Bible-believing Christians, and which ones are out of bounds? While I will not pretend that this post will answer each and every question, I will seek to sort through a couple of big-picture questions about the creation account in Genesis 1.

What is the Key Question?

It is easy for us to begin by asking the question, “What way of understanding Genesis 1 fits best with what we have come to believe about the nature of the world?” This is the wrong question. It will inevitably lead to us seeking to force Genesis 1 to say something that it isn’t saying. Instead, we should begin by asking the question, “What does Genesis 1 say and mean?” We must allow it to stand on its own before we explore how it relates to other factors.

One of the reasons why it is so important to begin with the right question is because, as Christians, we are better off avoiding the quest to be compatible with the current scientific consensus. I don’t say this from a standpoint of opposition to science. I simply say this because it is not our calling. If we have come to believe that Scripture is the Word of God, then this means that we place greater authority and trust in Scripture than we do in scientific consensus.

If we try to force Genesis 1 to say the same thing as the current consensus, what will we then do if the consensus shifts (as it often does)? As Christians, we are certainly not anti-science. But we also must avoid the idolatry of seeking the approval of those in the scientific community.

Along with this, it is worthwhile to remember that science, while incredibly helpful to us, is also limited. Science is about exploring how the world works. But while scientific discoveries may be capable of telling us a great deal about the way that the world is, they are much less capable of telling us how the world used to be. Science may offer many hypotheses, but these are limited by the many things we don’t know.

And when we start making theories about what happened millions of years ago, we are forced to make numerous assumptions in order to arrive at those conclusions. We must assume that we know exactly what the world was like, exactly how long certain events took, and exactly how similar the world today is the world in the past. We should acknowledge when we are dealing with solid footing and when we are dealing with much assumptions that are much less solid.

For example, I recently heard someone talking about what weather patterns were like 120,000 years ago. Now, it seems silly to me that we would think we could know something like that with any level of certainty. Our known history as a human race doesn’t even go back one-tenth of that many years. I heard another sociologist talking about the “fact” that 350 million years ago we were all lobsters (in the evolutionary process). Whatever you think of evolution, this can hardly be treated as a fact.

The myriad assumptions that must be made in order to land at that conclusion are astonishing. None of this makes these assumptions untrue. But all of this reminds us that science has limitations. It is better at telling us about the current world than telling us conclusively about the world in the past.

What Does Genesis 1 Say?

Let’s now explore the question at the core of it all. What does Genesis 1 say? Straightforwardly, it says that one God created everything out of nothing and that he did so in six days and then rested on the seventh day. He created through speaking. He spent three days forming the world and then three days filling the world. And, finally, he uniquely created mankind in his image.

On the other hand, at least three common interpretations are consistent with Genesis 1. First of all, there is the straightforward interpretation that God created everything in six literal 24-hour days. Some (but not all) people who hold this view add that there may have been a large gap of time between God’s initial creation in Genesis 1:1 and when we start forming things in Genesis 1:3. This view is consistent with the passage, and it certainly is possible.

After all, God can do anything. And those who complain that the earth seems to be much older than this view would suppose can consider the fact that God created with apparent age. Rather than creating seeds and eggs, he created plants and animals. Rather than creating an infant, he created a man. This view is certainly a possibility. Its main downside is that it is strongly in conflict with the current scientific consensus.

A second view is that Genesis 1 is telling us about a real historical event but in an artistic and non-literal way. Similar to how the book of Job tells us about a real historical occurrence, but in a poetic form, it is possible that Genesis 1 is communicating that God created everything out of nothing by giving us an artistic and beautiful passage describing it. This is certainly possible and consistent with what we read.

After all, the fact that God starts with light on day 1, but doesn’t create the sun, moon, and stars until day 4 may signal to us that this is not strictly literal and sequential. On top of this, Genesis 1 is very different from Genesis 2 and beyond in its form. This may mark off Genesis 1 as a unique passage in its genre. On top of this, there is only one passage in Scripture that specifically refers back to the six days of creation (Exodus 31:17), and the context is the establishment of the Sabbath.

This probably means that literal six-day creation is not a foundational issue Scripturally. It is not a point that the authors of Scripture spend much ink on. The main disadvantage of this view is that it is not as straightforward as the first view.

A third view is that Genesis 1 is speaking not of six 24-hour days, but of 24 extended periods of time. This is possible because the Hebrew word “day” sometimes means an extended period of time. And this view allows for the belief in a much older earth than the first view would seem to indicate. While I respect many people who hold this view, my opinion is that this view has the disadvantage of each of the first two views. On the one hand, this view requires us to take Genesis 1 literally and to take the days as strictly sequential.

Even though the extended periods of time would bring us closer to alignment with scientific consensus, it still would present a strong contrast with it. On the other hand, this view also has the disadvantage of clearly not being the most straightforward way of reading Genesis 1. If the author intended for us to read the days as extended periods of time, why did he include the mentions of evening and morning?

While I think this view is certainly within the realm of Christian orthodoxy, I don’t find it particularly helpful, while I find the other two views to be better representations of what the passage is saying.

What is the Core?

If it is permissible for Christians to differ on our interpretations of Genesis 1, does this mean that we are free to disagree on every element of the question of origins? The answer is no. There is a core that we must hold to. Christians can disagree about the end times questions concerning rapture and millennium, but we must all agree on the physical and visible return of Jesus Christ to judge the world, bring a final resurrection, and usher in the new earth.

Similarly, Christians can agree to disagree about the exact timing of creation, but we must all hold to the belief that one God created everything out of nothing. We must also hold firmly to the belief that mankind is uniquely created in the image of God. These are core beliefs because the authors of Scripture return to them again and again, and because the authors of Scripture base foundational doctrines on these foundational teachings.

I am far from being an expert in science—and I am also not the foremost expert in the creation account in Genesis 1—but I have benefited greatly from a number of resources, and you may find them helpful as well. My top recommendation is Francis Schaeffer’s book Genesis in Space and Time. It is very readable and profoundly helpful. Along with this, I found great help in Lee Stroebel’s book The Case for a Creator, Douglas Axe’s book Undeniable, and the book Reading Genesis 1-2: An Evangelical Conversation (which contains contributions from several authors). All of these are good options for further reading.

On top of this, a few years ago Fuz Rana from Reasons to Believe came to LBF Church for a Deeper event and spoke on the subject of faith and science. Feel free to check out the video of that event if you would like to hear him walk through some of these issues.

May God bless and lead each one of us as we seek to live in light of him as the great Creator and the great communicator. All praise and glory be to him!